Advantages of SSD over HDD

The pace of modern life is growing every year, and with it the demand for fast technology: who is now ready to wait tens of minutes until one song is downloaded? Nowadays, when absolutely all devices become smart – from a vacuum cleaner to a toothbrush – there is one permanent device, by the example of the evolution of which we can clearly observe the development of all electronics. Of course, we are talking about a computer, without which it is impossible to imagine the normal functioning of any office, production, and even a household. Over the course of its existence, computers have come a long way from giant machines the size of a room to compact and really powerful devices. All of its elements have undergone significant changes, especially in recent years. And since the work of a computer is primarily focused on computing and manipulating data, today we will talk about the change that dramatically affects the speed of these particular processes.

As we know, the processor processes millions of instructions per second, and its performance is highly dependent on the speed at which data is fed to it for these calculations. Sometimes it takes a lot of time to wait for a response from the drive. Hard disks (Hard Disk Drive or HDD for short), due to their design, are rather slow: before loading, you need to wait until the electric drive spins the magnetic plates with data, and the reading head finds the desired sector. In particular, to improve this indicator, a new format was created – a solid-state drive (SSD), which since its invention has also gone a long way from an ultra-expensive technology for the elite to a universal and affordable solution. If you need maximum performance and speed from a computer (which is important for any computer nowadays), then you can’t do without an SSD. The main difference between legacy HDDs and solid state drives is how it works. The SSD does not have a spinning magnetic disk, which, with large amounts of data processing, can start to make noise and heat. SSD uses less power from flash memory and takes up less space. In addition, these devices are more reliable since they have no moving parts. In fact, even the slowest solid state drive will be three times faster than a hard drive in most cases. But progress does not stand still, and even the relatively new SSD technology is developing rapidly. Many manufacturers – Micron, Samsung, Intel and others – are moving from SATA SSDs to more compact and faster NVMe devices. 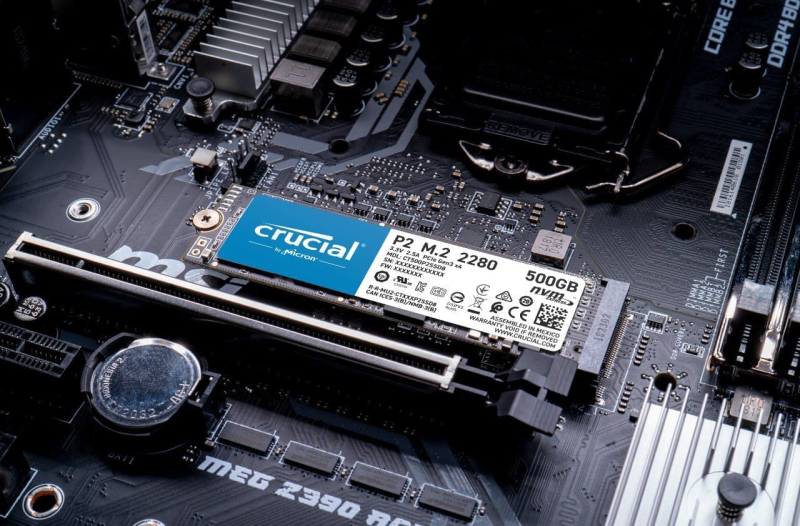 The new type of drives is relevant primarily to those users who work with large amounts of data. With the proliferation of ultra-high resolutions, editing video and photo content has turned into working with very large files. This, in turn, has led to increased requirements for components and data storage systems. Yes, the source files can, as before, be stored on a hard disk with a high capacity, but due to the limited speed of reading and writing data, working with them, to put it mildly, is inconvenient. For the normal functioning of such programs for processing media data, such as Photoshop, Lightroom, Premiere Pro and others, you need an advanced processor, RAM and, of course, a video card. But, along with them, an SSD is also required for efficiency – a properly selected drive will increase the performance of your computer.

However, thanks to the intensive development of technologies and requirements not only for high-tech and specific processes, but also for the most ordinary and everyday formats of using computers, the relevance of high-speed storage systems now extends to our home and office PCs and laptops. With an affordable solution that will significantly improve our experience of interacting with any program and any process (whether it is creating a working presentation in PowerPoint or playing Cyberpunk 2077), it seems absolutely logical to consider upgrading the storage system from HDD to SSD. A simple example: the download speed of any program is much higher when compared with a similar installation on the HDD. So, modern games (as one of the most demanding programs) require modern components corresponding to them, capable of quickly processing a large amount of data. Solid-state drive will significantly reduce the waiting time, open worlds will load faster and smoother, and in principle, the entire gaming experience will be many times more pleasant and comfortable.

Of course, a lot in a properly selected computer also depends on the budget, and before, many of us preferred hard drives due to their relative cheapness with an impressive amount of memory. However, by now the cost of SSDs is almost equal to HDDs. Yes, you still have to pay a little more for high speed with comparable storage capacity, but this price is justified if you carefully examine the difference between a solid state drive and a hard drive: SATA SSD is three times faster than HDD, NVMe SSD (working via PCI-e 3.0 interface) five times faster than a SATA SSD, and an NVMe SSD (PCI-e 4.0 interface) ten times. 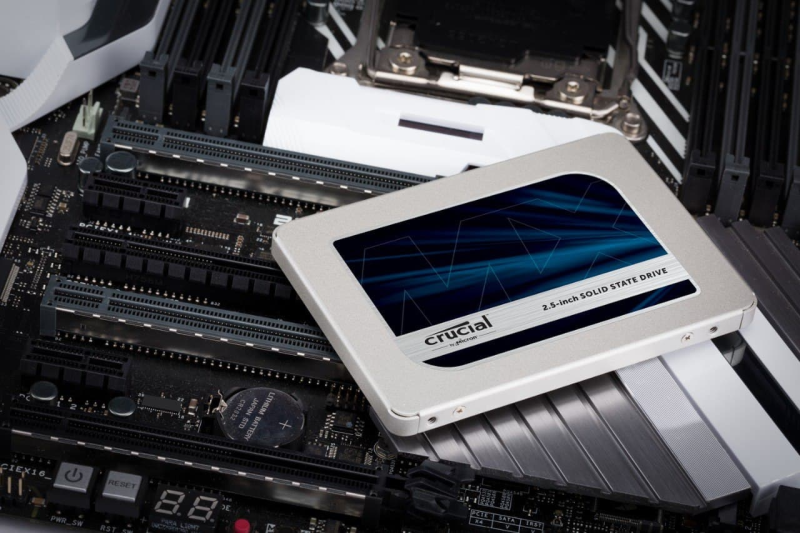 Previously, hard drives without a chance won in terms of the amount of stored data – but now modern SSDs bypass their predecessors here too. For example, a drive Crucial P5 Plus the latest generation is available in a configuration up to 2 TB, and this is not the limit. Among NVMe devices, there are drives up to 4 TB. So it makes sense to leave hard disks in the system solely as storage for finished projects.

If we talk about the speed characteristics even more precisely, then it is worth returning to the drive already mentioned above: it is capable of developing read speeds up to 6.6 GB / s and write speeds up to 5 GB / s. This is 10 times faster than SATA SSDs, limited by their interface bandwidth: maximum 650 MB / s. Most 2.5-inch SSDs connect to computers via the SATA bus, while modern NVMe drives use the bandwidth of the high-speed PCI-e interface. The drive from Micron, for example, supports the latest data transfer protocol – PCI-e version 4.0. This allows you to provide peak speeds and the fastest access to large files. As a result, NVMe drives with PCI-e 4.0 support dramatically speed up the load and export times of content in Lightroom, Capture One, and other photo and video editing software. 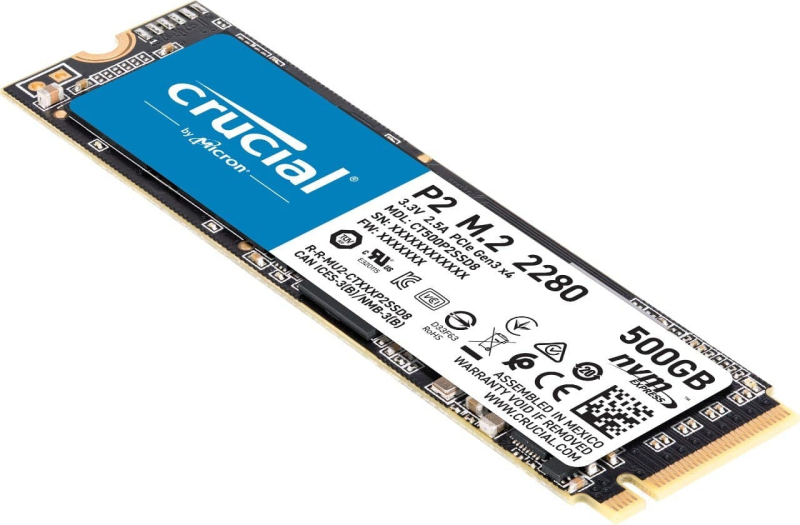 Another important consideration when choosing a drive type is its reliability. Despite the external strength (the hard drive will most likely not break if dropped on the floor), HDDs are highly susceptible to malfunction due to vibration or shock. And since there are no mechanical parts in an SSD, they are not afraid of such physical influences. Moreover, solid-state drives have software systems that can predict possible failures and protect data from loss. Yes, information on an SSD is stored in flash memory cells, which have a limited lifespan – over time they can wear out and become ineffective, but the data will not be lost, since the microcontroller will transfer the information to another cell, which in the end will only extend the life of the device. The overwriting of these cells is uneven, so the lifespan of the SSD may even exceed the manufacturer’s stated one.

The main characteristic of SSD fault tolerance is the maximum number of terabytes of data (TBW) that can be written to a drive before it wears out. For example, for the same Crucial P5 Plus 2ТБ that’s 1200 TB with a 5-year warranty. That is, with a memory capacity of 2 TB, the drive can be completely rewritten 600 times. This means that every day for five years, 689 GB must be rewritten, which is almost impossible even with the most intense work. The overall speed of the high-quality functioning of a computer depends on correctly selected volatile RAM and non-volatile memory. Instant loading of the operating system, fast opening of files and response to user actions even under heavy load of tasks are important for high work efficiency.

In order to speed up a computer using an SSD, you need to pay attention to the choice of the connector for connection. Initially, solid-state drives were positioned as a direct replacement for HDD, therefore they were connected to the motherboard via SATA. Now these are 2.5-inch drives, which are used in many modern computers, however, in laptops they are installed instead of the HDD, and not in parallel. More compact is an SSD-drive connected via M.2: it is a light board without a case, 22 mm thick, and the length can be 30, 42, 50, 80 and 110 mm, so you need to clarify in advance what length of the connector the computer supports. But SSDs connected via PCI-E look like video cards and are installed in the same connectors. There are also devices on the market that are PCI-E adapters for M.2 drives. Connecting a solid-state drive through this connector will fully unleash the potential of using an SSD: the speed will be measured in gigabytes per second. They are ideal for building servers, but they may not be suitable for most PCs due to their relatively high price and the fact that they simply cannot demonstrate their full power for everyday work tasks.

Therefore, if the computer is assembled taking into account the support of the PCI-e 4.0 interface, Crucial P5 Plus will be an excellent choice in terms of value for money. Among the drives on the market, this one is in many ways superior to competitors and can even be used in laptops.

Chrome OS is the Most Popular Laptop Operating System After Windows

Maybe not many people know about the Chrome OS, operating system for Chromebook. In fact, Chrome OS is the…
Read More

How to find out the motherboard model in Windows and Linux

If you decide to upgrade your computer or laptop, then the key question that you may hear will…
Read More

But as with Yahoo’s own fate, the service gradually lost its fame and users, eventually becoming a story…
Read More