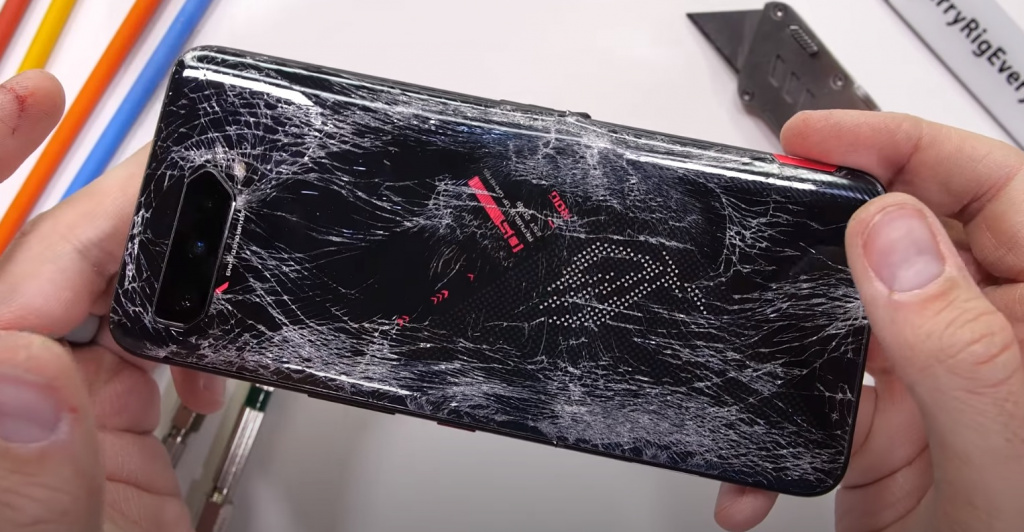 Zach Nelson from the YouTube channel JerryRigEverything conducted his usual crash test, but this time he got a very interesting smartphone – ASUS ROG Phone 5. It costs from 799 to 1299 euros depending on the amount of memory, this is one of the most expensive and advanced gaming smartphones, the more interesting it is to observe whether he will withstand torture with a knife, fire and hands.

Zack made the usual manipulations for him – he scratched the screen, side edges, back cover, buttons and glasses on the cameras with the blades, and then set the screen on fire and tried to break the smartphone.

The ROG Phone 5 uses Gorilla Victus tempered glass, which was only scratched successfully with a blade of the seventh degree of hardness, which is quite a decent indicator. Black paint from the edges of the case, power button, volume controls, programmable touch button and SIM card slot cover is scratched effortlessly, revealing the true aluminum color. The plug of the connectors for connecting gaming accessories instantly fell off, from which we can conclude that it is easy to lose it. The SIM card slot does not have a rubber band to protect it from water ingress (which is not surprising, since the ROG Phone 5 lacks water and dust certification. The back cover of the smartphone and the glass that protects the camera set also resists scratches well.

From a short heating with a lighter, a spot formed on the screen, but after a few seconds it disappeared without a trace, that is, the matrix was easily restored.

Zack did not manage to break the smartphone in half like a cookie, but when bending one of the edges cracked at the location of the plastic “window” of the antenna, the glass of the screen slightly moved away from the case, and the vibration motor began to emit unnatural sounds similar to the hissing of a cat. On the second attempt, the damage became even greater (the glass cracked and the back cover came off strongly), and on the third, the entire rear part was covered with a web of cracks. At the same time, nothing happened to the backlight on the lid, it was joyfully shimmering in different colors, as if everything was fine.

Zach concluded that the ROG Phone 5 has weak points, and if you press too hard on one of them while playing, you could accidentally damage your smartphone.