The latest series from OnePlus, the Nord 2 5G, which was discussed in the previous report, will debut on 22 July. This was announced directly by the company through the official OnePlus Nord Instagram account, while uploading a poster.

Not only the launch date, the design of the new smartphone was also revealed by the company.

Judging from the photo in the uploaded poster, on the back of the phone, there is a triple camera setup that seems to take some inspiration from the OnePlus 9 design.

Features two large circular cutouts and a small sensor housed inside a rectangular module. The LED flash is also inside the camera module.

Then in the middle of the back panel, you can see the OnePlus logo. This particular variant has a bluish green color, like a salted egg. Following previous leaks, this particular colorway will carry the Blue Haze moniker. That’s the only design of the OnePlus Nord 2 5G that can be reviewed based on the Instagram upload. 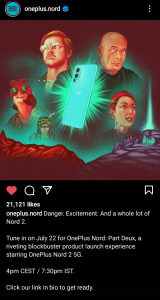 Turning to the leaked specifications, as quoted from Gizchina, according to OnePlus, the main camera on the OnePlus Nord 2 will be the main Sony IMX766 50 MP sensor. This particular module is used as an ultrawide camera on the regular OnePlus 9 series.

Interestingly, this device will also feature Optical Image Stabilization (OIS), which is one of the features that makes the OnePlus Nord stand out against its competitors in the mid-range category.

Moreover, OIS is not very common among mid-range smartphones. The OnePlus Nord 2 camera setup will also have an 8MP ultrawide camera and a 2MP sensor. This third sensor is likely for macro shots or depth sensing. For selfie cameras, this device will have a 32 MP Sony IMX616 front camera. Furthermore, the module will live in the punch hole aligned on the top left.

According to previous leaks, the OnePlus Nord will use the MediaTek Dimensity 1200 AI SoC. Also, the device will come with up to 12GB of RAM and 256GB of internal storage. It’s a customized version of Dimensity 1200 with extra AI power for performance, efficiency and camera quality. The device is also said to be powered by a 4,500mAh battery with 65W fast charging. OxygenOS 11.3 with Android 11 will also run on this new device.

After the launch of the temporary messaging feature last year, the WhatsApp now you must extend the function…
Read More

Can the O2 Meter application replace the oximeter function? Check the facts