Samsung has just launched the Galaxy Z Fold3 and Galaxy Z Flip3 foldable smartphones. Now, a new patent is circulating which reveals that the company is working on a new Galaxy Z Fold model that will also feature a roll-out screen.

The patent also comes with various product sketches, which give an idea of ​​what this device will look like. Based on the sketch, this handset resembles the Galaxy Z Fold3 which has an inward folding design with a large main screen.

Although the design is similar to the Galaxy Z Fold3, its extendable roll-out display makes it distinctly different from any other foldable phone on the market today. In this regard, Samsung has patented two variants for this upcoming foldable and roll-up device.

With the Model A, the screen can be rolled up and extends from the right side when the device is folded, while the Model B has a screen that extends from the left side when folded. In conclusion, unlike the Galaxy Z Fold3, this new upcoming device does not appear to have an external display, but instead comes with an expanded screen that offers the same functionality to users. 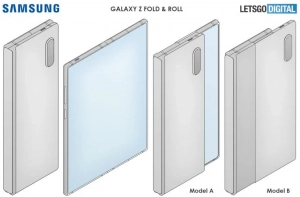 Talking about the Samsung Galaxy Z Fold3, this folding phone comes with an IPX8 rating for water resistance, and is equipped with S Pen support. Then, the Galaxy Z Fold3 sports a more than 7.6-inch Dynamic AMOLED 2X with a refresh rate of 120Hz, more adaptive than its predecessor, but now the selfie camera is under the screen instead of behind the punch hole, making the Z Fold3 the first Samsung phone with a camera. UD (under display).

Hidden features of the Samsung Galaxy A52

Smartphone exists to simplify various activities and make it easier for humans to carry out their daily lives.…
Read More

OnePlus has unveiled a special edition of the Nord 2 Pac-Man Edition smartphone. The novelty was created in…
Read More