There are many graphic formats, they differ from each other in one way or another. In fact, some formats were generally created for the implementation of a practical specific problem that the available options could not solve. For example, before the advent of JPEG, image files took up too much storage space. Thanks to this format, it was necessary to create a format to optimize them.

But when talking about the JPEG format, JIF, JPG and JPEG file extensions are often found. Does this format really have several varieties? In fact, all these extensions refer to roughly the same thing. And to understand why this format had several names at all, you have to understand the complicated history.

The acronym JPEG stands for Joint Photographic Experts Group. The graphics extension gets its name from the subcommittee that helped create the JPEG Interchange Format (JIF). It was first published in 1992 by the International Organization for Standardization (ISO).

JPEGs are 24-bit still bitmaps with eight bits in each channel of the RGB color model. This format leaves no room for an alpha channel, which means that while JPEG files can support over 16 million colors, they cannot support transparency.

When an image is saved as a JPEG, some of its data is discarded. This process is called lossy file compression. In turn, the image takes up 50-75 percent less storage space compared to older formats such as BMP. And the loss of quality in this case turns out to be insignificant or it is not visible at all.

You can think of JIF files as an implementation of the JPEG format in its original form. However, this format is no longer used because it has some annoying limitations. For example, JIF’s color and pixel aspect definitions have caused compatibility issues between encoders and viewers (decoders).

Fortunately, these problems were later solved by other additional standards based on JIF. The first of these was the JPEG File Interchange Format (JFIF), and later the Exchangeable Image File Format (Exif) and ICC color profiles.

And if JPEG/JFIF is currently the most popular format for storing and transmitting photographic images on the Internet, then JPEG/Exif is the format for digital cameras and other image capture devices. But most people don’t see the difference between the two and just call them both JPEGs.

Instead of the discrete cosine transform used in JPEG, JPEG 2000 uses wavelet transforms, based on the representation of the signal in the form of wave packets.

JPEG 2000 files have the extensions JP2, JPF, J2K, etc. The format was supposed to be the successor to JPEG, but turned out to be nowhere near as popular. But sometimes his advanced encoding method led to a better image. 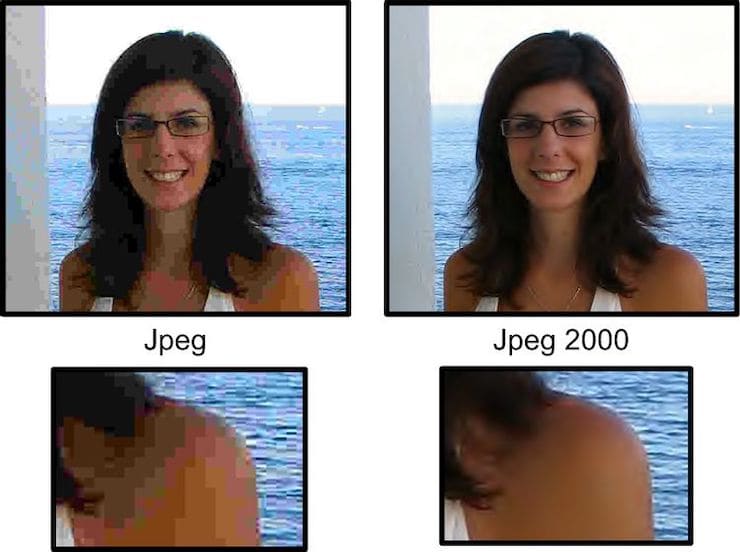 The JPEG 2000 file format failed for several reasons. First, it was based on completely new code and was therefore not backwards compatible with JPEG. On top of that, processing JPEG 2000 files required more RAM, which was a major hurdle at the time. After all, the average computer then had only 64 MB of memory.

JPEG 2000 is currently experiencing a renaissance as computer hardware has improved a lot over the past 20 years, but the file format is still very little used.

Early versions of Windows (particularly those with MS-DOS 8.3 and FAT-16 file systems) had a maximum limit of 3 letters when it came to the length of file extensions. JPEG had to be shortened to JPG in order not to exceed this limit. Mac and Linux computers never had this limit, so users continued to save images in JPEG format.

Popular image editing programs that ran on different operating systems, such as Photoshop and Gimp, ended up setting the file extension for the JPEG format to JPG by default to avoid confusion.

So we got two file extensions for the same format: JPEG and JPG. And when choosing the option to save the image there is no difference between them.

JPEG vs PNG: which is better?

JPEG and PNG appeared in the same decade, with each file format solving different digital imaging problems then faced by the technology world. It can be said that it is quite natural to constantly compare these formats, both initially and today. Which file format to choose between JPEG and PNG?

Actually the answer depends on which image you are saving.

JPEG is better for photographs because it uses lossy compression to keep the file size reasonable. Photographs are usually large and detailed images in which compression-induced artifacts (minor image distortion) are not particularly noticeable.

On the other hand, images with sharp dots, sharp edges, and large areas of the same color (such as vector logos, pixel art, etc.) do not look quite right when saved as JPEG.

And here the Portable Network Graphics (PNG) file format shows itself perfectly. It was developed by the PNG Development Group four years after the release of JPEG and supports lossless data compression and transparency. This is why PNGs are often used if image quality is to be maintained and file size is not an issue.

A good rule of thumb is to use JPEG for photos and PNG for images with transparency and non-photographic images.

The main thing you need to remember from what you read is that JPEG and JPG are the same file format. Despite the confusion caused by JPEG, with its many updates and variations, the boom in digital images on the Internet in the mid-90s was no doubt primarily due to the advent of this image format.

The next time you’re about to export a photo from an image editor and you’re presented with a long list of available formats, remember that JPEG and JPG are the same thing.